I just discovered that StreamLabs OBS has several premade overlays and layouts for league of legends, but does not have one for Dota. Well I can't have that. Dota is far superior so it needs a far superior overlay. I've started by designing one based around the games minimalist default user interface. After a round of testing and feedback I'll be moving on to making overlays that match different DotA overlays. My current one is the burning scale overlay so I will be starting there.

To install these you need to be using Stream Labs OBS. Go to Settings, then Overlays and import overlay. Browse to where you downloaded the overlay file to and open it. The overlay file is an archive containing everything you need. It will add you a new scene collection with the same name as the overlay file.

If you find these overlays useful please consider Donating through streamlabs or check out my Twitch Stream and give me a follow. 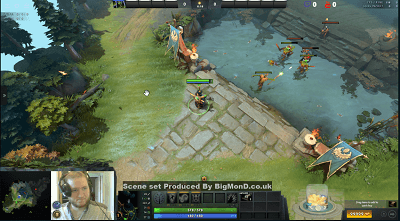 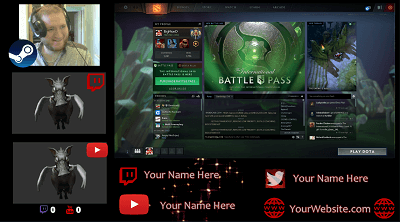 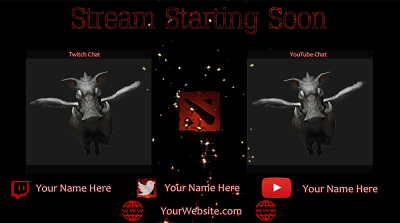 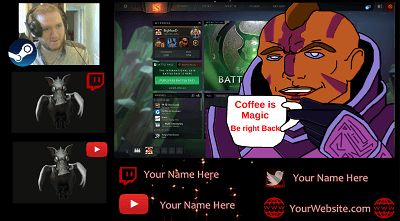 KNOWN BUG - There is a bug with SL OBS import system that does not add the filters correctly. The files are bundled but you need to add them manually. See below for filters
KNOWN BUG 2 - The game source does not import for you. There is a placeholder where it it needs to be. You need tom manually place it.

This overlay has 4 Scenes, "Live", "Client" and "Stream Starting Soon" and coffee break. All 4 are themed around Dota's minimalist user interface. This aims for maximum open screen space, unlike other UIs and overlays which cover much of the screen. The camera location has been placed alongside the map with cutouts for the camera allowing the fortify and scan buttons to show through. This allows a large camera and blends into the interface.

It supports both Twitch and YouTube chat and supports a placeholder in either place so you won't have to change sizes, you will just have to hide the chat you are not using. Or you could just stream to both simultaneously. Everything is placed in groupings to allow easy editing of the layout, or show/hide groups you do not wish to use. Alert boxes are also used and on the live scene is setup to be a decent size but out of the main playspace so it never obscures a sick play.

One great feature of this overlay is the built in stream sniping protection. The map is overlaid with fake wards in random locations that move every few min. This will mislead anyone taking a quick glance at your stream attempting to cheat, it is very satisfying when you see someone trying to deward one of your fake wards that isn't really there. Of course inspecting the map closely enough will reveal which wards are fake based on fog of war, this is obvious to viewers but not obvious to people taking a glance. There is a sped up version of the stream sniping tool included to demonstrate this feature which you can delete once you have installed it.

This is an alpha build, awaiting further testing. Please let me know how it works and any issues you have. This was built for a 1080p canvas. It should scale to other ones too but I've not tested that yet and some manual sizing may be required

Workaround for filter import bug - The files you need for the filters are bundled with the overlay but not automatically setup. First you need to know where they are saved. Right click the any image source, for example "Game Background (Delete Me)", and open the image source properties. Copy the path to the image file. It should look like this.

Next right click the webcam and select filters. Then hit the "+" to add a filter and select an Image Mask/Blend. Set the type to "Alpha Mask (Alpha Channel)". In the path paste the path you copied earlier but change the filename at the end to 33.png.

Next go to the Client Scene and edit the filters on the streamer Logo. Add the same filter as for the webcam but this time use 34.png