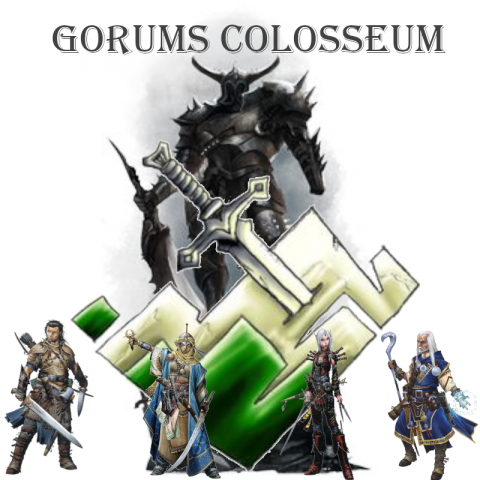 Gorums Colosseum is an extra planar space with a variety of different terrains. Mortals are plucked from their various planes and dropped onto one of the landscapes to do battle agaisnt other mortals. Some will be intelegent beasts, some mindless monsters. Mortals who survive a battle are moved on to another landscape to battle another mortal, and so on and so on with each foe being stronger than the last. The strongest contestants in the colosseum being just a small step down from gods themselves, which means that few lowly adventureers will ever make it any where near the final round of the torunament.

Mortals who impress the gods are granted the gods favour and returned to where they came, with no memory of the event. Those who fail to impress are allowed to fade into insignificance.

This adventure takes on the form of a gauntlet of waves of enemies. The DM randomly rolls on an encounter table for both terrain and for enemy faced. The terrain is initially rolled on a d6 expanding through larger dice up to d12 as rounds progress. Higher rolls correspond to terrain which has more unique challenges or other dangerous elements all of their own. The enemies are rolled on a d20 pulled from a table of hundreds of monsters, gradually increasing in challenge rating. With each win players get a +10 to the enemy selection roll ensuring that while randomised enemies will continue to grow stronger each round.

Players can keep any items or equipment scavenged from enemies and XP is given as a way of keeping score, although no one will be leveling up. As combatants take on the challenge their score (XP), and number of rounds will be recorded.

For the Twitch gods watching this event, divine power dice , upto d20, can be used to influence the next enemy roll by adding to it or subtracting from it.