Thorigal means "noble shield" but Thorigal was ashamed to carry that name. His sister, Shardra Geltl, had been wrongly accused of treason and had fled their homeland of Xolgrit. When the news reached Thorigal that his sister had been accused of treason he was shocked into inaction. He protested her innocence but as things grew more serious he felt stuck knowing not what to do. He was willing to go to war for his sister, but these were his people his friends, his family even,  but before he was able to resolve this his sister left of her own free will seeking better things.

Disheartened by his sister leaving he had no choice but to carry on. He spent his days working, but those around him knew that his spirit was in turmoil. He spent his evenings alone in his room trying to no avail to resolve his failure to protect his sister. After several weeks a letter arrived from Shardra but the news that she was happier in her travels did nothing to lift his spirits. He had always been proud to protect his family, just because things turned out ok did nothing to lift the guilt that he felt for failing his sister. She may have been able to fend for herself but his inaction still tore at him.

One evening as he walked home past the temple of Torag, god of protection, he walked inside and sat in prayer at the altar. At first he was a garbled mess as he spoke to Torag and Torag did not speak back. Something came over him as he sat there and as time went on and other dwarves went to sleep he just sat there at the altar of Torag in quiet contemplation, occasionally muttering things aloud to Torag. He spoke occasionally to the prists of recent events but did not seek their guidance. The clerics had to ask him to leave several times as he was in the way of their ceremonies but instead he moved aside and stood in the corner of the temple, returning to the altar when the clerics were finished. As he watched their routine he moved aside without being asked and eventually started offering to assist. As the days passed the clerics offered him food and water fearing for his health but Thorigal refused.

Late on the 7th day, weary from dehydration he leaned heavily on his warhammer as he knelt at the altar he spoke. His voice clearly laboured due to exhaustion but he spoke clear and loud.

On that Thorigal collapsed. finally sucumbing to dehydration. He awoke to a warm radiant glow and a cleric holding a cup of water to his lips. "Thank you for healing me", Thorigal uttered weakly. "I didn't" exclaimed the cleric, "We heal wounds here, not dehydration" At that moment Thorigal felt his shield arm itching, and pulled back his sleve to see a glow in the shape of the holy symbol of Torag. Taking a moment to gather himself Thorigal felt around for the handle of his warhammer, now also baring the mark of Torag on the handle.

"You didn't strike me as a religious man when you walked in here", the cleric exclaimed, "Why spend a whole week in prayer, even clerics rarely do that for so long without a break"

"I had to atone for my failure. Torag needed to know of my resolve through deeds, not words" Thorigal said climbing to his feet.

The cleric looked at him puzzled, and asked "What failure, sounded like things went ok for your sister, you didn't fail her."

"No, I failed myself" said Thorigal walking to the door.

After a week in prayer and study of the clerics Thorigal ranks fairly low as a cleric but he has earned Torag's respect showing that he will go to extraordinary lengths to prove his convictions with deeds.

Thorigal missed his sister, perhaps she didn't need protecting any more but he wanted to see her again and now he had a vow to keep. After a hearty meal Thorigal sets out. He doesn't know the world too well and if he is to keep his vow he will need to branch out from the riches of the city and find those in need futher afield. As he travels Thorigal returns home often, to check in on family and to read letters from Shardra. He also stops in at the temple again each visit to give thansk to Torag and to converse with the clerics there. Every time he returns home though he is eager to set out again following in the footsteps of his siter and hearing of her exploits and as opportunity presents itself making a name for himself helping thsoe in need. 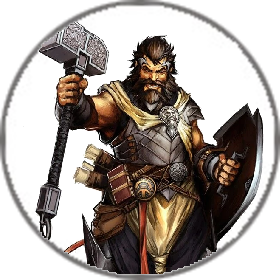 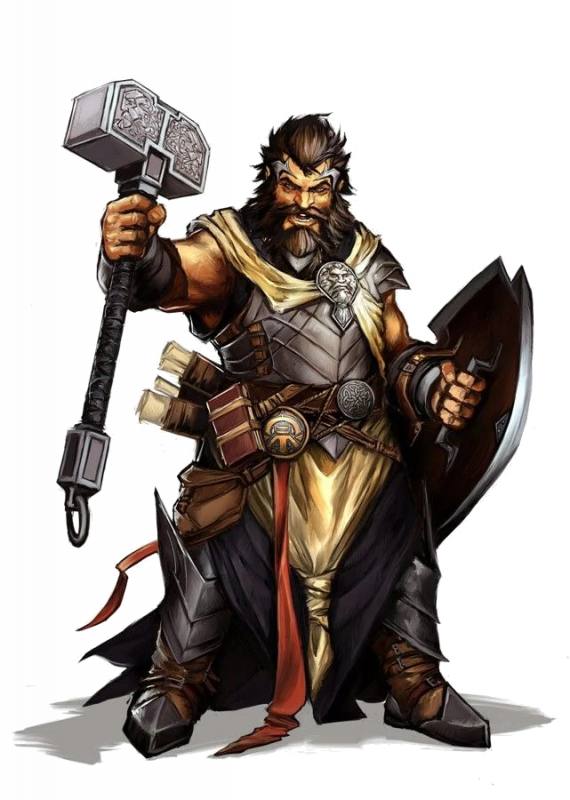