Our 4th session introduced a new player a Rogue called Mathias. (Reminder, I am a brand new GM who has never played and my players have never played either.) The player had never played DnD or Pathfinder and wanted to play a Dhampir since she liked the concept. Neither of us really knew how to play one though and at this point we have not expended past the beginners box set yet. I asked her to limit her character to something from the core rulebook so that there wouldn't be too much for us to look up. She chose a half-elf. It took us a few hours to make her character. This was the first time I had really looked at the core rulebook other than some brief glances to see plan what to learn next.

We started this session off with  the new player returning from a failed job and falling in a pit. Mathias explores the pit and finds a skeleton with some tools and loot, which I put there to give him a bit of a catch up to the other characters who were all on the cusp of level 3 and carrying some more than generous loot. Mathias also found a Dire Rat in the pit that sat in the opposite corner eying him up. He also finds a delicate enchanted gem that will summon a fire elemental to aid him if it is broken..

I had intended this encounter to be an introduction to combat for my new player but to my surprise she tried to befriend the disheveled dire rat offering it the rations she was carrying as food. I paused for a moment to consider how a dire rat would react and then decided I was so impressed my new player was trying things other than stabbing things that I would run with the theme and let her attempt to befriend the dire rat. A couple rolls later they are now friends and the dire rat digs up some gems that are buried in the floor, more loot catchup. The player then tries and fails to escape the pit but finds several fae creatures and fairies hovering above. These creatures rush off to find help.  I have a plan later to reveal these creatures motivations for traveling several miles to get help but for now my players accepted it as just a way to push them together. The fairies find the other players at an inn, since they are obsessed with booze. They hasten to rescue the new Rogue.

Upon arriving the wall of the pit collapses killing the rat much to the dismay of Mathias who was happy he made a new friend. The fighter and elf rogue are now in the pit with Mathias but since it now has a sloped edge they proceed to climb out. Before they reach the top of the slope a gargoyle attacks blocking them from scaling the sloped side of the pit. Attempting to save Mathias who took significant damage in the gargoyles opening attack Valerus, the fighter, tries to throw him up the opposite side of the pit to safety. Well its a high edge and Valerus fails his strength check launching Mathias into the opposite wall of the pit instead of up on the edge. I give Mathias a relatively easy reflex save here to see if he can grab the pit edge but he fails horribly and bounces off the pit wall landing on Taerinar's head. This also breaks the enchanted gem releasing the fire elemental

Taerinar at this point uses a magic item to web the gargoyle in place giving them chance to get their bearings. The cleric stands on one of the uncollapsed sides of the pit wondering how she ended up with these idiots. They then proceed to surround the gargoyle, try setting it on fire despite it being made of stone and then hit it with swords until it finally dies in a much more drawn out fight than it should have been. The party then returns to the inn to rest and get to know each other. 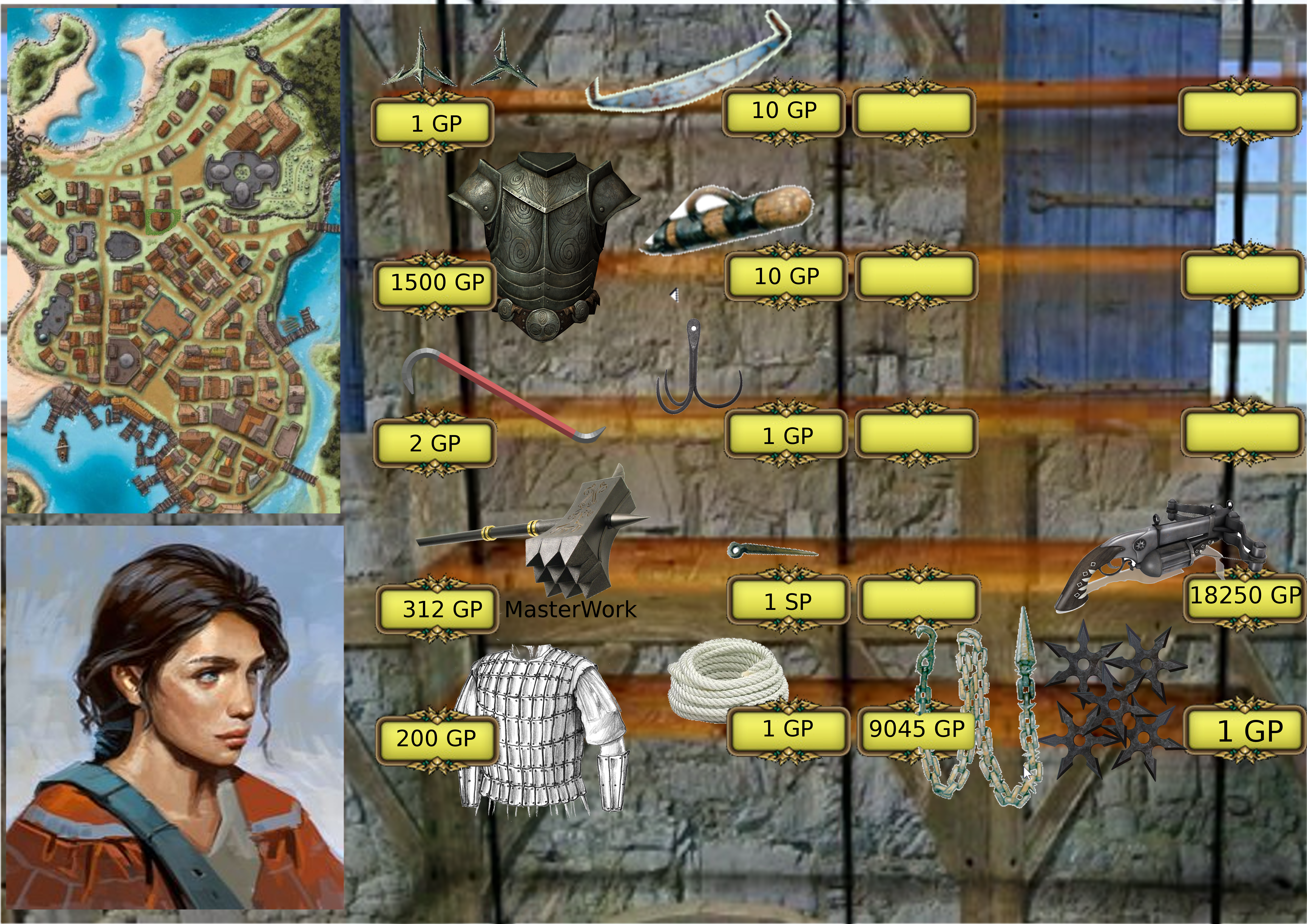 For this session I also made a shop front. I didn't want the players to have to look in the book what items were available every time they go shopping. Rather than simply rolling a list of random items I also started making shop fronts that display common items as a way to reinforce their existence and be a sort of themed reference manual. The shop front "card" has a themed shelf with items, an image of the shop owner and a small map. On the back of it is some basic info for reference such as the stats of the weapons for sale and the first paragraph of the characters biography.

I have also been building a table that can hang cards from each side to place reference info in without taking up table space.

So a few key things that cross my mind at this point.