After our second session one of my players (my fiancée) said she wasn't really enjoying playeing and we talked about why. Firstly she was being reminded of an x-partner (who was her last GM) who soured the game for her, and she felt like she was obliged to play because she thought the other 2 players wouldn't be able to play without her and she didnt want to let them down.

So I hatched a plan to deal with this issue. I told her the next session would be written so she wasn't needed. Told her to come hang out anyway because we like her hanging out. This story I planned for her character (Kyra) to get knocked out and kidnapped at the start of the session. Now should she decide she does not want to play I can make her an NPC and continue without her. BUT if she decided she wants to take part (as I was hoping) she could get involved. I made her captors carry her 1 encounter ahead of the others, she wakes up pretty fast but is still bound. This gives some greater insight into the story for all the players as they get to hear enemies plans when they are not around. I made sure to share spoilers for puzzles by wispering in her ear. I gave her lots of option to leave clues for the other players chasing her or to mess with her captors. I also gave options for her to escape but advised this could be dangerous if she choses the wrong moment.

This worked perfectly. She really enjoyed the session. She sat out for the first encounter, and then asked if she could regain conciousness, thankfully I had planned that all along. Now she was playing because she wanted to, not because she thought she had to.

I gave my players a few rounds to check out the jobs board I made, or attend shops and things. I made a real jobs board and posted some quests on it, some of which have secret notes or puzzles on the back. Kyra can attempt to escape at any point, following a decreasing difficulty fortitude check to regain conciousness, but she can also pull a princess peach and sit and wait to be rescued.

The first encounter was a simple fight vs a couple of wolves just designed to leave a couple of clues for later. Ameiko follows with the players, since they have become friendly with her and she was with them, when Kyra was kidnapped

The second encounter is a pit trap, with poison around it and at the bottom. Players can either leap over or try to climb around. There is a skeleton with some valuable loot, including a masterwork wolfbane dagger. My players fearing the pit used a grappling hook to fish for the skeleton.

The 3rd encounter is a puzzle. A magic tree blocks the path. Kyra overhears the enemies carrying her that its a simple matter to pass it, but trying to chop it down can be very dangerous. When the players arrive they manage to solve the relatively simple puzzle.

The 4th encounter is a camp. Kyra can overhear her captors discussing that they think they are being followed and send 2 of the wolved in their pack back to check. She can also try and steal back her weapon from a loot bag placed close to a cage she is being held in. She can aslo observe the WWs placing some loot in a hollowed out log and leave a clue for the rest of the party. These 2 wolves would be encountered in enconter 3 for the other players. Sadly Kyra failed to convince her captors to send 2 wolves back so this fight was tougher for the players. It was a fight vs 1 warewolf and 4 wolves. The fighter managed to take care of 3 of the wolves but the rogue in the party was cornered and having trouble doing decent damage to the warewolf. They also didnt have any healing items. The rogue asked me if he could use his acrobatics skills to do a power attack by using the wall to get extra height. I told him he could do that, and if successful he would do double damge, he woudl need to do an acrobatics roll AND his normal attack roll, failing either would result in him recieving -3AC until his next turn, representing him being off balance after failing the attack.

Encounter 5 is the final "boss" of this little run. Kyra has been moved to a steel cage near what looks like a kitchen. She can attempt to escape, or she can talk to the warewolf. The warewolf wants to turn her as a new wolf mother, but hasnt spoken to her yet so at this point the players are assuming Kyra is dinner. As soon as the players finish encounter 4 Kyra asks the warewolf to turn her. She had no idea of his plans, she just thought it would be cool to be a warewolf. He bites her and then tends to her wound with some healing herbs. The other players then arrive, to find Kyra now out of the cage and chatting with the WW. So no boss fight. My players who are usually murder hobos have now made friends with an NPC who is a fairly powerful ally, Kyra is now a warewolf, and they have adopted a couple of sickly wolf pups.

If anyone is interested I have a pdf of this little session. Please bear in mind its written as my own notes not for someone else but theres enough detail you should be able to run it yourself if you wanted.

During this session the rogue was having trouble feeling weak in combat. Is this something that can be solved with strategy. I know rogues are not expected to excel at head on combat. I was thinking of adding more detail to environments so theres more opportunities to damage enemies with environmental hazards or to hide in things to sneak attack. What about disengaging combat to use stealth again? What can rogues do to make their fighting better? 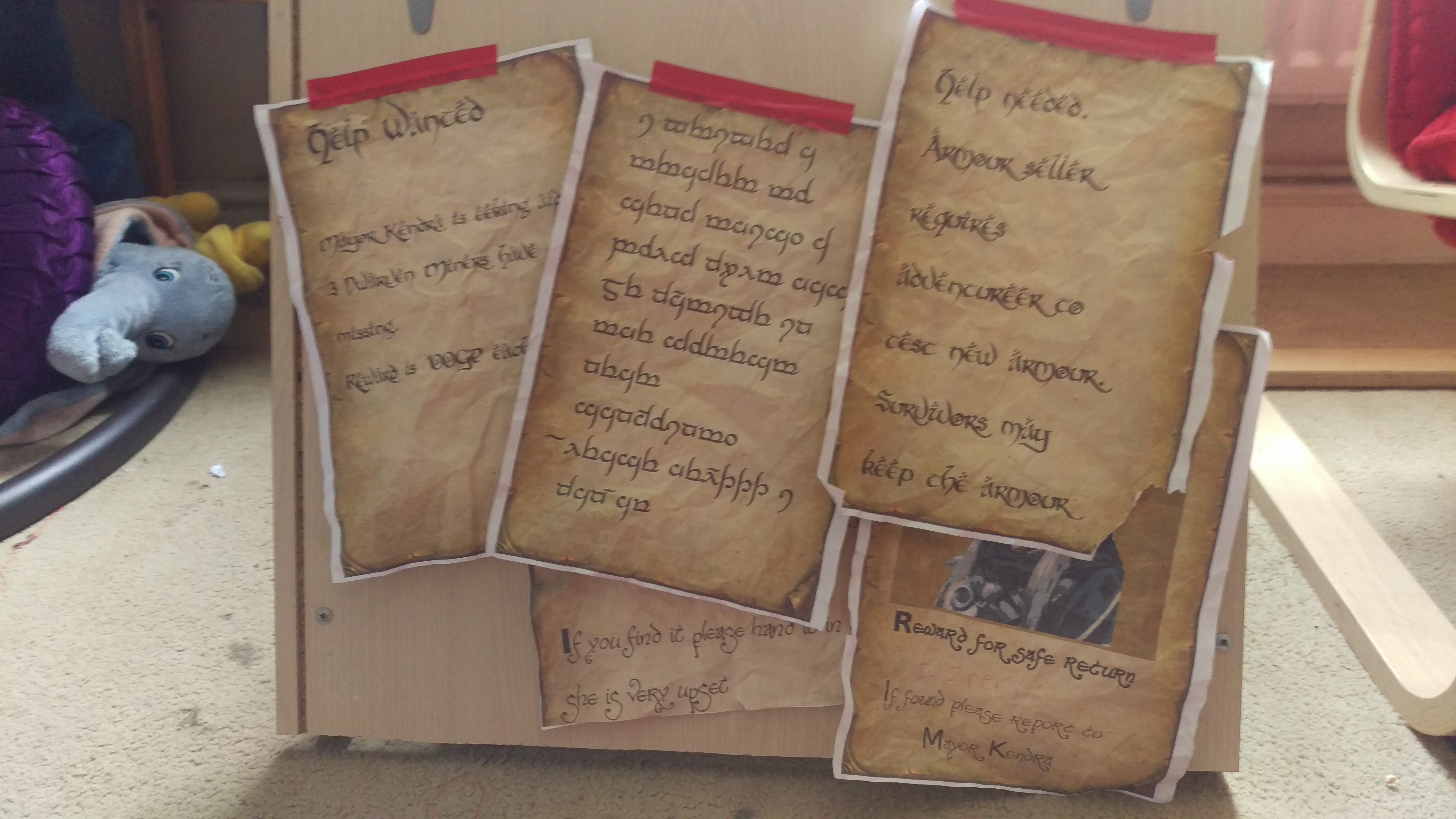 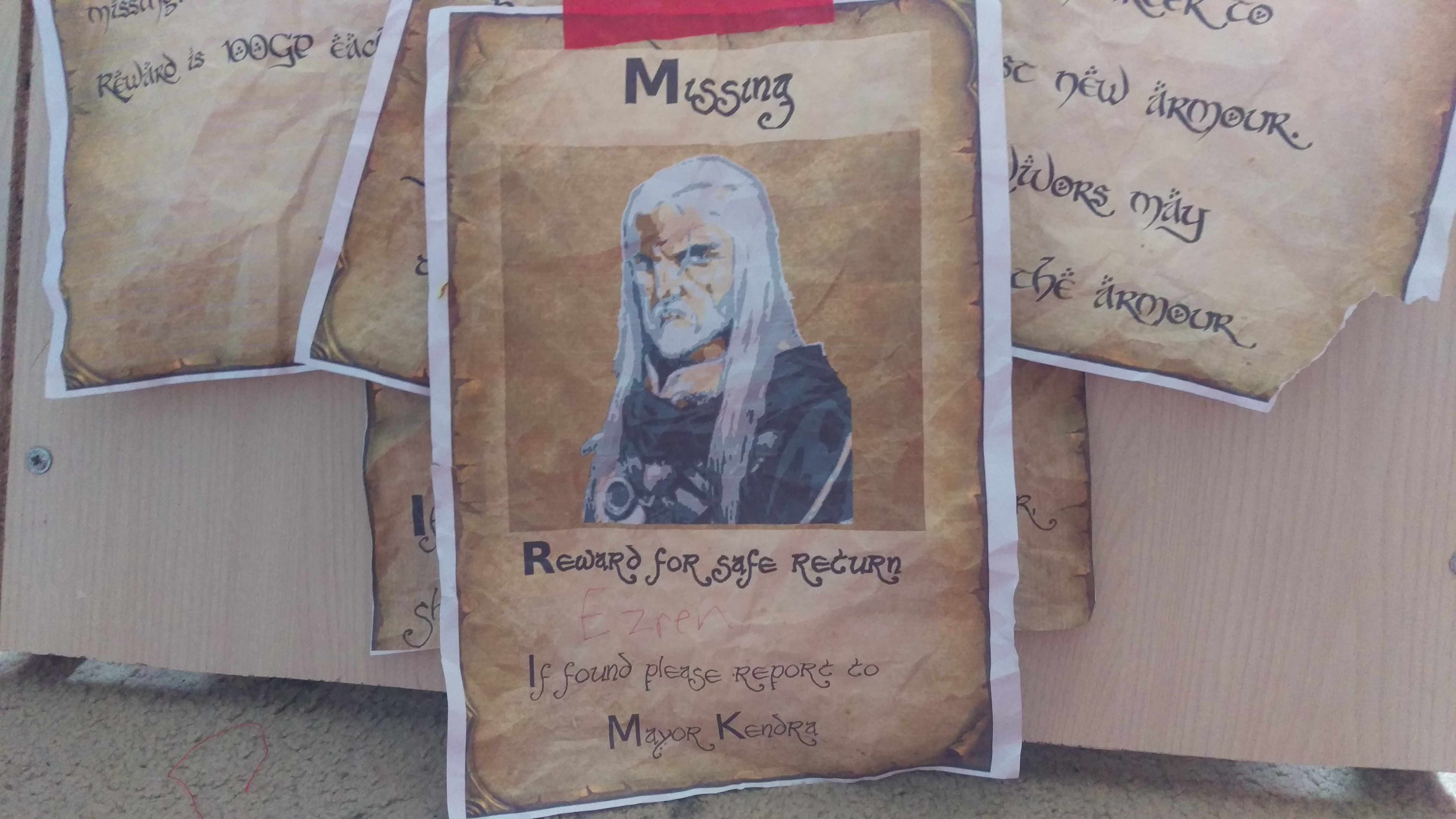 've been asked about my jobs board. Well I made a physical Jobs board to represent the one at the Rusty Dragon. Every time I write a quest or campaign I add a few things to my game world just for later. One of those is something to the jobs board. There are 5 quests here. I used therse as a visual aid really so that when the PCs are viewing the jobs board my players could view it too. On the back of each job is some text. Some of this is just additional notes left by the person who wrote the job in order to add some flavour to the world. Some of it though has puzzles on it. 2 of these have hints or puzzles for quests. The first is a simple job asking for help finding a missing toy. My players have already been on a quest for a missing toy, after seeing this. The note on the back is someone gloating that the heros are morons. It reads.. "Some idiot thought the doll was Valeros. Morons!!! If they only knew!" Valeros is the name of the fighter in our party. Valeros, because he is an idiot ate the dragon toy form the beginners box set. It was enchanted and gave him powers. There are other enchanted magical toys lying around but no one has yet questioned why or their meaning. Perhaps they have a sinister purpose. No one has yet quesstioned why there is a quest on the jobs board for a quest they have completed, perhaps it is repeatable, perhaps it only appears to be the same quest. I haven't decided all the details yet but its not simply a matter of someone forgetting to take the job down.

The second one that with a quest is the one with strange writing on it. No one can read that. It was posted by a messenger the messenger is staying in town but no one knows that yet. He posted it on behalf of someone who is trapped in a dificult situation. It was written and posted in a hurry, hence the lack of translation. Someone has since been up and wrote a rather cryptic message on the back of the poster. No one knows why yet and my players have not figured out thay can read the text vertically to spell out a message. The message itself is a decoy, The vertical text is the clue that a nest is nearby and a ring is the key to the seal. 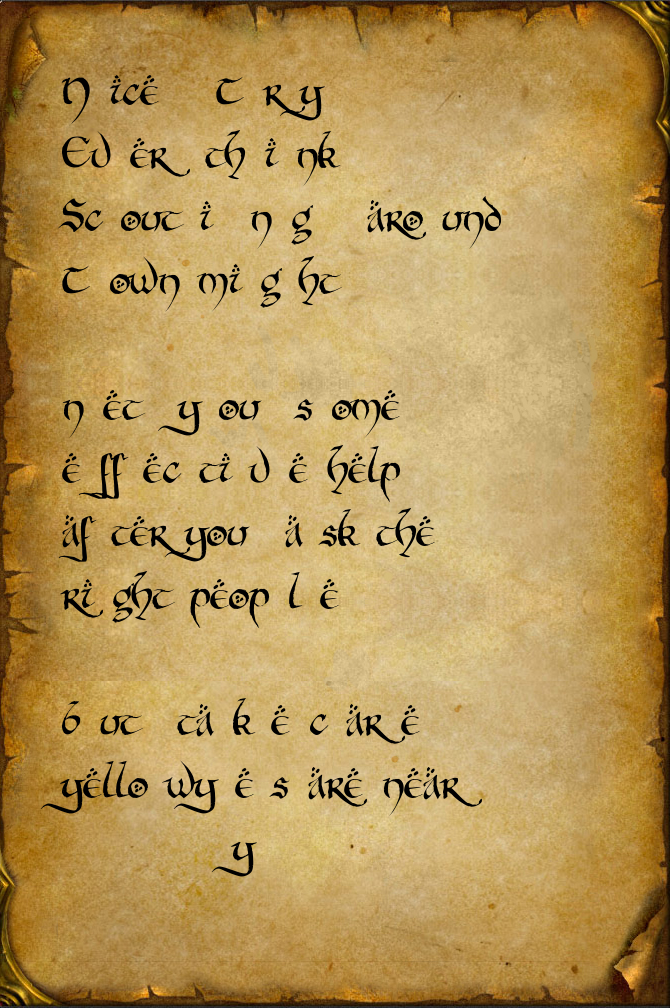 Next session I am adding a flyer to the Pixies Kitten to the jobs board which will confirm its existence, despite any NPCs insisting it does not and it can't be found anywhere in town. I have lots of plans for the brothel since my players seem obsessed with it.